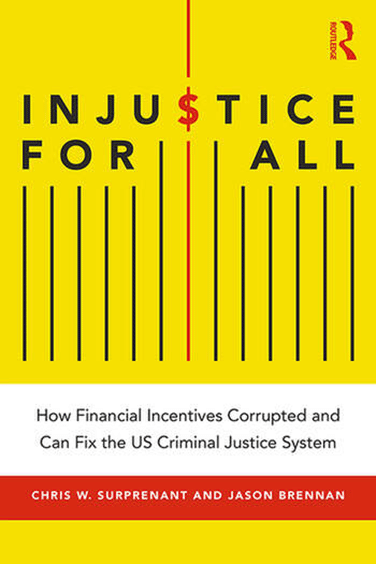 Injustice for All: How Financial Incentives Corrupted and Can Fix the US Criminal Justice System

American criminal justice is a dysfunctional mess. Cops are too violent, the punishments are too punitive, and the so-called Land of the Free imprisons more people than any other country in the world. Understanding why means focusing on color—not only on black or white (which already has been studied extensively), but also on green.

The problem is that nearly everyone involved in criminal justice—including district attorneys, elected judges, the police, voters, and politicians—faces bad incentives. Local towns often would rather send people to prison on someone else’s dime than pay for more effective policing themselves. Local police forces can enrich themselves by turning into warrior cops who steal from innocent civilians.  Voters have very little incentive to understand the basic facts about crime or how to fix it—and vote accordingly. And politicians have every incentive to cater to voters’ worst biases.

Injustice for All systematically diagnoses why and where American criminal justice goes wrong, and offers functional proposals for reform. By changing who pays for what, how people are appointed, how people are punished, and which things are criminalized, we can make the US a country which guarantees justice for all.