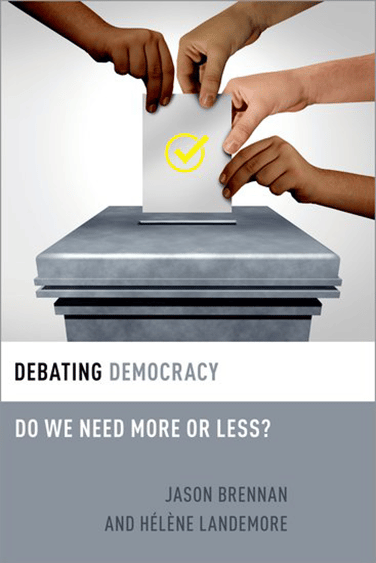 Debating Democracy: Do We Need More or Less?

Around the world, faith in democracy is falling. Russia, Turkey, and Venezuela have moved from flawed democracies to authoritarian regimes. Brexit and the rise of far-right parties show that even stable Western democracies are struggling. Partisanship and mutual distrust are increasing. What, if anything, should we do about these problems? In this accessible work, leading philosophers Jason Brennan and Hélène Landemore debate whether the solution lies in having less democracy or more.

Brennan argues that democracy has systematic flaws, and that democracy does not and cannot work the way most of us commonly assume. He argues the best solution is to limit democracy’s scope and to experiment with certain voting systems that can overcome democracy’s problems.

Landemore argues that democracy, defined as a regime that distributes power equally and inclusively, is a better way to generate good governance than oligarchies of knowledge. To her, the crisis of “representative democracy” comes in large part from its glaring democratic deficits. The solution is not just more democracy, but a better kind, which Landemore theorizes as “open democracy.”